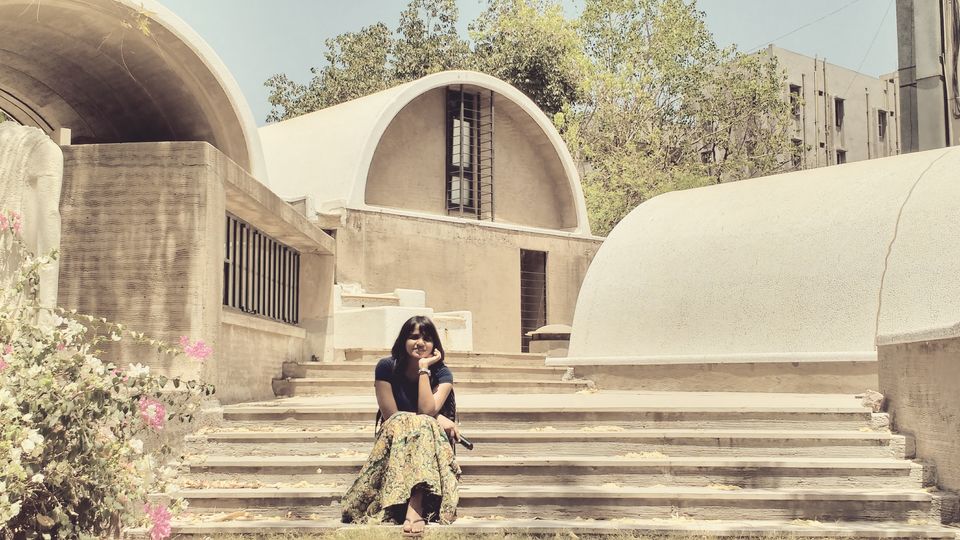 Ahmedabad or as its known as the Manchester of the east ,is a city located in Gujarat which has traces of architecture from traditional Gujarat step wells to the work of Louis kahn. It has architecture which allows you to embrace simplicity and boldness in its volume simultaneously and denying from you any kind of set behavior in a spaces formed by the volume.It simply lets you be.

I happened to visit this city this summer .I was traveling from Mumbai to Ahmedabad and there is this obvious difference between the density of architecture of these two places. Ahmedabad lets you breathe with the way its spaced out effectively .

This city was founded by ahmed shah in 1411 ,and its growth was measured by the marvelous architectural commissions of its various rulers. The mosques, temples,palaces, tomb complexes, step wells, and forts from this sultanate period are a fusion of Islamic forms and the architecture of the local Hindu and jain communities ,with latter style of architecture being more prominent in this amalgamationIItarted my trip by visiting Gandhi smarak sanghralaya at Sabarmati ashram .It’s a community that is made up of the main ashram pavilion, two guest houses, congregation place ,and a museum. The museum ,that is designed by Charles Correa is laid out on the ground in 6*6 mt grid format .I think the architect has built the entire museum on gandhi’s philosophy on life, culture and nature. In particular a quote by Gandhi that states.” I don’t want my house to be walled in all sides and my windows to be stuffed .I want the cultures of all the land to be blown about my house as freely as possible. But I refuse to be blown off my feet by any.” But what we really feel there is not culture of all lands but simply nature in its simplest and truest form being imbibed by the structure. That I believe brings out the simplicity in the style of architecture along with the use of local materials like brick, concrete and wooden louvers for light and ventilation. The plan of the museum has been considered analogous to village houses of india’s banni region. Instead of one massive single volume, the structure consists of five independent rooms that surround to make a water courtyard .The outside blends so wonderfully with inside that you never really get a sense of an enclosed place.The structure simply lets you be in that space by denying any kind of set mannerism.

It was a delight indeed to be in that space which was also an abode for Mahatma Gandhi and Kasturba Gandhi.

Later we visited the stepwells of Ahmedabad ,adalaj vav being one of the most well known of them. Stepwells are a perfect marriage of form and function in a typical Gujarat style.Form being the intricately carved details which totally leave you awestruck when you look at it and function being a cool communal space for recreation and relaxation.

We ended our first day by treating ourselves to gujarati thali and let me tell you I haven’t eaten like that in a long time!It’s a must for all the people who are visiting Gujarat. You will not regret it!

We commenced our next day by visiting the institutional buildings which represents the blend of modern architecture with Indian tradition.My visit to IIM-A showed me how bold and powerful volume becomes with the use of natural light.You might think that it would dominate the open space or nature which the architect has so beautifully incorporated in the space but all it really does is make the entire volume or mass lighter with those gigantic cutouts in the wall. 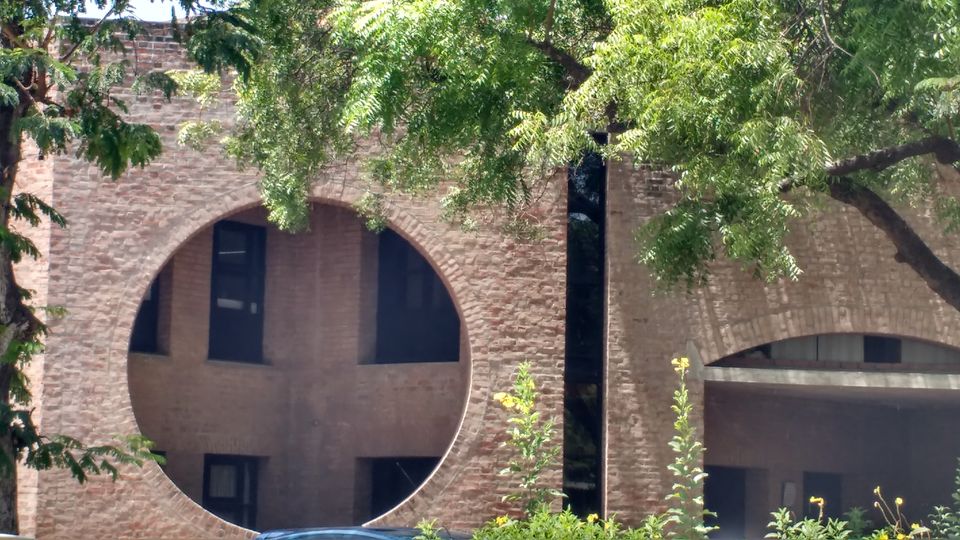 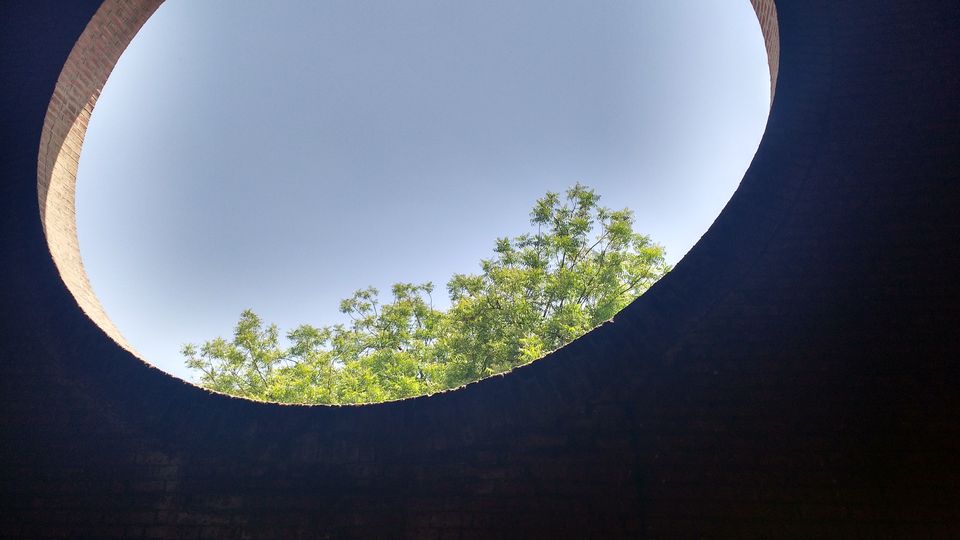 Later we visited sangath,which accommodates vastu-shilpa firm and has been designed by B.V Doshi.It sits so humbly on the busy streets of Ahmedabad.Your entrance into the structure takes your soul to a calmer place because of the soft music playing in the background ,the green ambience,the water bodies and the use of local materials to build the structure.The volume of the structure is comfortable in scale because it sinks into the ground and the vaulted ceilings kind of being the only existence of the structure when seen from the street.The outside space of the structure is really informal in nature as they have conducted discussions to marriage reception in that place!It wants to be a structure that welcomes everyone and making it more than just an administrative place.

We later visited CEPT university which has been designed by the same architect .It’s beautiful but walking in that campus under the cruel heat of summer,we had to maneuver quickly through the space which in some way denied the university to function as a whole but only function as individual volumes in that big campus which didn’t happen in IIM-A.

In the evening we roamed the colorful street of lal darwaza which is also the main shopping bazar of Ahmedabad .We hoped to find something colorful and dazzling as the people over there had promised us that we would ,and indeed we bought he jhumkas and the chaniya choli as a souvenir of the place!

On the last day of our trip we visited akshardham ,which is this huge temple complex that is dedicated to Swaminarayan and his life.This complex in its first glance leaves you awestruck with its overwhelming scale but after maneuvering through the space it makes you question the design of the complex and for me it fails at some level.There is a linear pathway that leads you to the temple with its shaded aisle so that it works in all seasons but after that to get through the entance gate to temple is one long walk in the open under the hot sun and that’s where it doesn’t make sense because it has these passage ways on the periphery of the complex which you thought might lead you to the sanctum sanctorum,but it doesn’t and you have to kind of walk really fast so that you make it to the shade which will only be found if you reach the temple.Well if the architect wanted us to quickly be in the ‘presence’ of swaminarayan and ignore the presence of the architecture at it’s periphery then maybe that was achieved.Once you are in the temple you are left amazed by the scale of the dome and the details done on the columns of the temple.The temple takes you through swaminarayan’s life through series of paintings and readings.This temple would be best experienced if visited in the cold months to avoid the heat in the open space of the complex.

We ended our visit by having lunch in the rotating hotel of Ahmedabad,patang and it would be a delight for all the vegetarians!It helps you get all kinds of panoramic shots of the city.

Ahmedabad is a city that has architecture which expresses itself differently in different seasons but all equally powerful.